MORE THAN THIS by Patrick Ness 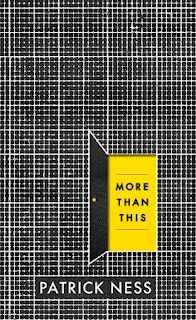 Seth dies a brutal death, crushed on the ocean floor.  When he wakes up he is  in a strange, desolate, but somewhat familiar place and he can remember every detail of his death.

This is the opening chapter...WOW this is going go be another brilliant addition to Patrick Ness' accomplishments but unfortunately it just didn't deliver.

I've really mulled this one over before attempting my review, and I still don't know how to convey my thoughts without giving anything away.

I loved the Chaos Walking trilogy and A Monster Calls and I so wanted this to be another firm favourite but alas, and I know I'm in a minority here, I really didn't like it at all on several levels; plot, characters, world building plausibility, and who is the intended reader: Teen? YA? I had put some questions to Patrick Ness but as yet I've received no reply so I'll go ahead with my thoughts.

As a parent, career or teacher would you want your 12/13 year old reading a book with, albeit  only a minimal part of the storyline, explicit scenes between 2 guys? The scenes are beautifully portrayed and sensually written and it's not a complete surprise as Patrick Ness has touched on the subject in the Chaos Walking trilogy.  Although these elements of the story were in my opinion fine for the young adult audience, much of the book seemed to be targeted at a younger reader and seemed inappropriate. I was confused and the two styles didn't gel for me.

My son raised the issue with me and the conversation went something like this;

Much easier to explain than;
Son: 'he's a cock fiddler!'
Me: 'umm well yes that's what ... umm what book are you reading?'

I don't sensor what my kids read but I would like some warning as to the level of sexual content contained within a book aimed at teens / YA.

As for the plot, I thought it was lacking in depth with flat characters which I didn't believe in.  'Much More Than This' raised far too many unanswerable questions for me, the world created was far too implausible.


Unable to recommend this one as I just didn't care for it at all although some pretty good discussions could be had in reading groups.