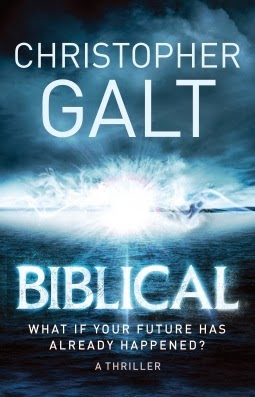 Synopsis:
An apocalyptic thriller that pits cutting-edge science against God and asks the question – who will win?

Something is happening around the world. People are having visions, seeing ghosts, witnessing events that could not have taken place.
At first, the incidents are scattered and infrequent, the visions unremarkable. But as time goes on, the visions become more sustained, more vivid. More frightening. Psychiatrist Dr John Macbeth is in a desperate race to find what is causing the phenomenon. And when someone close to him is murdered in a bomb blast, his quest for the truth becomes much more personal.

An apocalyptic thriller on an epic scale that will make you question your own reality.

All around the world, people start to see things that aren't there, that cannot be. Visions, ghosts, events from the past playing out in the present.
To start with, the visions are unremarkable: things misplaced in time and caught out of the corner of the eye; glimpses of long-dead family or friends. But, as time goes on, the visions become more sustained, more vivid, more widespread. More terrifying.

As the visions become truly apocalyptic, some turn to religion, others to science.
Only one man, driven by personal as well as professional reasons, is capable of finding the real truth. But the truth that psychiatrist John Macbeth uncovers is much, much bigger than either religion or science.
A truth so big it could cost him his sanity. And his life.

My Thoughts:
The opening scene had me hooked immediately with the depiction of a French teenager finding herself in amongst a crowd of people witnessing the execution of Joan d'Arc.  She manages to take a picture of the horrific scene on her phone.

Around the world people are experiencing hallucinations, having feelings of déjà vu, and accidents and mass suicides are occurring on an alarming scale.

It is a time where science is destroying religion as it answers the mysteries and miracles of old.

Macbeth, a psychiatrist involved in a neuroscience project, finds himself hurled into a race against time to uncover the mystery of the phenomena. Is it caused by a virus, or are these visions sent from God as believed by religious leaders and fanatics worldwide? Is the world readying itself for 'The Rapture'?

Christopher Galt's 'Biblical' is a fantastic piece of fiction blending elements of scientific fact and human genetic anomalies. Galt's characters come to life with his empathetic writing style, and the numerous memorable characters are totally plausible and mesmerising. I felt as though I were watching a film, they were so well drawn out. I couldn't wait to find out what was going to happen to each of them as their fate unfolded. Mary Vermont's heart felt tale of her frustration and anguish of suffering from Alzheimer's and the happiness albeit brief of the visions she has was particularly poignant.  It was easy to imagine what it must be like to have this awful disease looking through Mary's eyes. Each and every one of Galt's characters has an equally compelling tale to tell and I loved finding out about them all.

Biblical kept me guessing all the way to its mind blowing climax.  It is an intelligent, imaginative, addictive, apocalyptic thriller that kept me reading well into the early hours.

Definitely my favourite this year.


I would like to thank the publisher and NetGalley for the opportunity to review this title.