The Weight of Blood by Laura McHugh 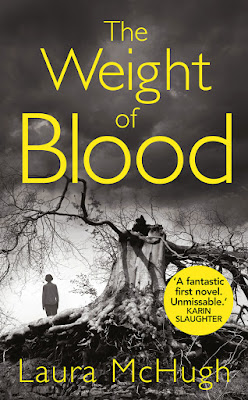 Synopsis:
It is a long time since I have read a debut as impressive as Laura McHugh's The Weight of Blood. It is a chilling portrait of a small town in the Ozarks where violent men are protected and young women vanish." (Joan Smith, The Sunday Times). People still whisper about Lucy Dane's mother who vanished years ago from the town of Henbane, deep in the Ozark mountains. When one of Lucy's friends is found murdered, Lucy feels haunted by the two lost women: by the mother she never knew, and the friend she couldn't protect. But her search for answers, in a place where secrets are easily concealed, leads her to a chilling discovery. And with this revelation, she must grapple with the meaning of family, the secrets we keep, and the lengths we will go to protect the ones we love.

My Thoughts:
After missing for a year the body of Cheri Stoddard has finally been found. The gruesome discovery of her dismembered body has left the Henbane community horrified and Lucy Dane her only 'friend' compelled to find out what happened to her.

Set in the fictional town of Henbane in the Ozark's, Missouri, 'The Weight of Blood' is about two missing young women; Cheri from the present, and Lila from almost two decades before. It is also a 'coming of age' tale with Lucy and Lila, telling their story in the form of alternating chapters.

The majority of Henbane's menfolk are pretty mean and disrespectful of its womenfolk and display an unfriendly, at best, attitude and mistrust toward outsiders. Lucy is Henbane born and raised but even she is still not fully accepted by the superstitious, insular, small minded community.  Her resemblance to her mother doesn't help matters as it reminds them of the woman they viewed with suspicion and believed to be a witch.

Gothically atmospheric and hauntingly mesmerising, 'The Weight of Blood' is disturbingly dark with cruel deeds being done to the more vulnerable members of the community by bad, or ignorant individuals. I found it almost impossible to leave Lucy and Lila, and read with red rimmed eyes for hours to find out what would happen to them.

The pace is steady for the first half of the book, setting the scene and getting to know the characters complex personalities and back stories. Thereafter, it gains in momentum and intensity in the lead up to the final outcome.  With only a quarter of the book left to read I did wonder if McHugh would be able to pull it all together convincingly. However, I was not disappointed as the final reveal felt plausible and in context with the rest of the book and didn't feel contrived or forced in any way.

My only quibble is the lack of distinction between the voices of Lucy or Lila, even their names felt too similar, making it difficult to recognise who was speaking. At times I had to re-check the start of the chapter to remind myself who was narrating. That said, I still absolutely loved it.