It is very easy to play along:
• Grab your current read and open to a random page
• Share two (2) “teaser” sentences from somewhere on that page
• BE CAREFUL NOT TO INCLUDE SPOILERS!
• Share the title & author, too, so that other participants can add the book to their TBR Lists if they like your teasers!

Here are my “teasers”:
‘Carver crouched, holding his light close to the small bird’s broken body. Its left eye had been smashed. A thin steel ring was visible in the back of the socket. Tiny shards of black glass lay on the floor and in the empty socket. Its feathers were threaded with shiny black strands that Carver guessed were photovoltaic filaments. There was no blood.’

(Yeah I know, it’s 6 sentences but they’re very short so I added a few!) 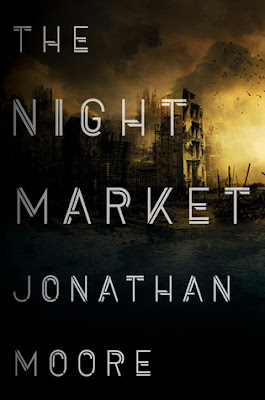 Synopsis:
'Do you ever think there's maybe something that's gone wrong with the world?'
A man is found dead in one of the city's luxury homes. Homicide detective Ross Carver arrives at the scene when six FBI agents burst in and forcibly remove him from the premises.
Two days later...
Carver wakes in his bed to find Mia a neighbor he's hardly ever spoken to, reading aloud to him. He has no recollection of the crime scene, no memory of how he got home, and no idea that two days have passed. Carver knows nothing about this woman but as he struggles to piece together what happened to him, he soon realizes he's involved himself in a web of conspiracy that spans the nation. And Mia just might know more than she's letting on...'Moore has a great gift for the macabre and the creepy.' The Times’

My Thoughts:
With such an explosive and heart pounding opening scene, The Night Market had me riveted to the edge of my seat.

It is the final in a loosely connected trilogy with all three set in San Francisco at different time periods and genre category. The Poison Artist is a taut noir psychological thriller; The Dark Room more a police procedural storyline, and The Night Market being the first I’ve read is set in the near future with a dark, tense, creepily claustrophobic sci-Fi setting.

Definitely readable as a stand-alone novel, the writing and world building is incredibly vivid and frightening plausible.  With a likeable cast of complex characters, and strong storyline The Night Market is an absolutely recommended read for 2018.