TLC Book Tour Between The Lies by Cynthia A. Graham 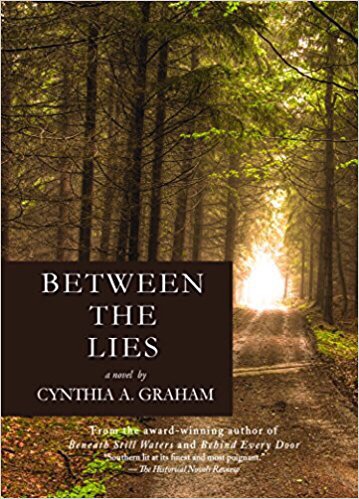 Synopsis:
When the corrupt sheriff of Broken Creek, Arkansas detains a young black boy on charges of accidental homicide, his sister asks Hick Blackburn, Sheriff of Cherokee Crossing, to investigate. Hick is reluctant at first. Not only is Broken Creek out of his jurisdiction, but Hick and Sheriff Brewster have a history, and Hick knows Brewster won’t look kindly on his interference. But Hick quickly realizes the boy couldn’t have committed the crime. With the aid of a New York attorney trying to make a name for herself and a shy new deputy who knows the boy’s family, Hick uncovers a conspiracy that goes to the heart of local corruption, nepotism, and racism. But while Hick is working to free an innocent child in Broken Creek, his beloved Maggie, pregnant with their third child, faces challenges of her own back home. This time, will Hick’s dedication to justice extract too high a price?

Heartfelt and poignant, Between the Lies by Cynthia A. Graham handles the complexities of Southern culture and the depths of its racial past with grace and finesse. The character development and plot are deep and complex. This is a novel full of heartbreak, but a story of hope is at its true heart.”–Hunter S. Jones, author of Red Stilleto Strategy

My Thoughts:
‘Between The Lies’ is book three in a southern mystery series set in Arkansas during the 1950’s about small town sheriff Hickory Blackman. In this instalment we follow Hick over the course of four days in July, in an ongoing mental fight with an influential bully in the nearby county of Broken Creek.

Sheriff Brewster has brought into custody a local black child, Thaddeus for the killing of a white man even though, obvious to any ‘dumbass’, that physically Thad is incapable of committing the crime.  Such evidential facts, however, won’t get in the way of Brewster’s objective of obtaining a guilty conviction for such a convenient scapegoat.

A conversation between Hick and Father Grant, pastor of Broken Creek, brings to light the case of George Stinney a 14 year old black boy who was tried for murder, found guilty, and executed.  Now I was intrigued and ‘googled’ George Stinney who from the southern state of Carolina was (rightly or wrongly) found guilty of murder in similar circumstances. I was deeply affected, it was incredibly upsetting and heartbreaking to read about such cruelty, inhumane treatment of a minor and ultimately the horrific execution of a child. Was this a warning of what may be in store for young Thad. Not if Hick has anything to do with it. It’s going to be a fight, but with mental ingenuity to outsmart Brewster it’s not something that Hick will easily allow to happen.

Graham’s style of writing, much like our protagonist, is calm, intelligent and measured.  In contrast to the languid pace she also manages, without being preachy or altering style or pace of the novel, to manoeuvre into place a powerful, poignant nugget of historical fact for the reader to mull over.  Awareness of this event in history added another layer, dimension and understanding of the characters living within a community steeped in racial hatred, and run by a corrupt and bigoted sheriff.  I couldn’t help thinking, with the current worldwide political climate, that we appear to be coming full circle and learned very little if anything from the past.

Now that ending ! Wasn’t what I was expecting at all, and it knocked me for six. A very sad unsettling denouement.  Just another chapter in Hicks life to be overcome and I am keen to see how his character develops and moves on from it.

‘Beneath Still Waters’ is the first book in the series, and although there is a sense of growth in Hick’s character, ‘Beneath The Lies’ could easily be read out of sequence or as a stand-alone. I havn’t yet gotten around to reading ‘Behind Every Door’ but do intend on doing so before the next book.  I highly recommended this series.

““You white folks are something else. You like to pretend you know what’s best for us, that you got our interests at heart. But at the end of the day you get to go home and be safe and white. We don’t get to leave. We always black.”

“We all had the same orders. Plant fear in the hearts of the townsfolk regarding colored people, because fear will always turn to hate. After the hate starts to grow, point out things like desegregation will cause inter-marriage and inter-marriage will create a mongrel race of half-breeds. Tell them their women are in danger and that a black man touching a white woman is an abomination.”

“...and Uncle Earl told me to never mention that man’s name again. He said for me to shut my trap and let him run the town as he sees fit. Told me I ain’t nothing but a dumbass anyway and that he only hired me ’cause my mama begged him to.”


Thank you to TLC Book Tours, and Blank Slate Press who provided me with a digital copy in order to take part in this tour.