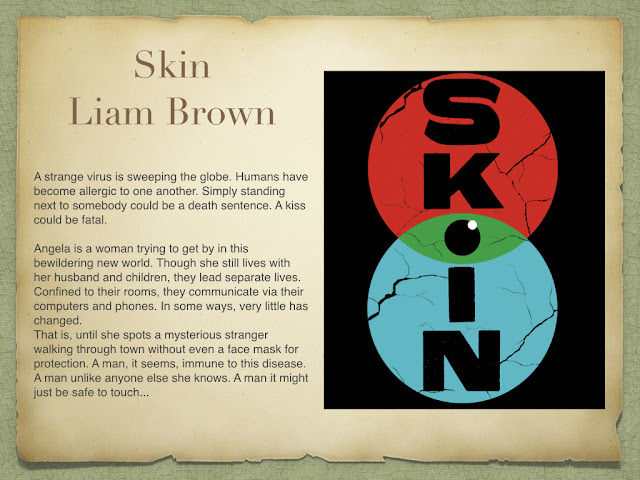 
My Thoughts:
Brown’s imagined world where humans have become toxic to each other is a very dark and foreboding place. Through flashbacks we get to find out how such a place has come to exist and how as a family Angela, Colin and their two children, Amber and Charlie have changed over the duration from the past into the present paranoid, government oppressed, state controlled world.

There are some interesting dynamics at play from within the family environment where each household member lives in imposed solitary confinement.  Totally isolated from the rest of humanity they can never be with each other without the protection of their protective suits for fear of contamination. To create some semblance of normalcy however, Angela insists on eating ‘together’ at mealtimes over a live feed to their individual tv monitors. During one such gathering there is the normal sibling rivalry, bickering and teasing, and a sulky teenage blowout where instead of storming off to their room the kids simply switch off their tv connection.

As a family in such circumstances they drift apart from each other and withdraw into their own private environment, adapting sometimes rather selfishly in order to cope or make sense of a world in which they now find themselves.

Amber and Charlie seem to have managed this process without any obvious difficulties. They’ve remained in their rooms with their x-box, internet computer games, or communicating with the outside world online. Seemingly less affected by the isolation and lack of physical contact or companionship than their parents.

Brown writes with perceptive insight about his female characters and I believed in the personality and behaviour of them.  I was drawn emotionally to Angela, a mother like myself, I felt her anguish at not being able to instinctively reach out to console and comfort those she loved nor to ever be able to physically demonstrate her love for her husband again. I felt her despair in her impossible search to fill the gaping void in her life.

Angela then discovers a young man without any protective clothing while out exploring on her official patrol duties.  Although she should report him to the authorities she keeps his sighting a secret and over the following weeks Angela transitions from a trusting compliant, law abiding citizen to a questioning and suspicious individual challenging what she has been told about the virus.

Brown shows us what it could be like in this plausibly imagined dystopian tale.
Its a world where human contact is forbidden as well as highly dangerous, deadly even. Where skin to skin touch and stimulation from the smells of the environment around us is denied.  Where intense desires to be loved and touched is an all pervasive desire.  He paints an all too vivid picture of just what the future could be like with such deprivation. It’s a bleak place to be.

For me ‘Skin’ had more of a YA feel to it rather than the adult audience targeted and believe it would be enjoyed by both. Skin was an enjoyable entertaining read and with an ending I didn’t see coming would love to read a sequel...I would like to hear more about ‘the egg’ to which the narrator shares her feelings throughout.