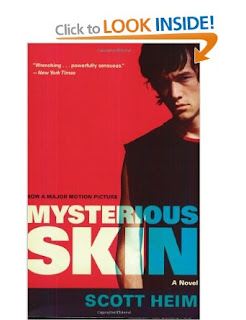 "At the age of eight Brian Lackey is found bleeding under the crawl space of his house, having endured something so traumatic that he cannot remember an entire five–hour period of time.

During the following years he slowly recalls details from that night, but these fragments are not enough to explain what happened to him, and he begins to believe that he may have been the victim of an alien encounter. Neil McCormick is fully aware of the events from that summer of 1981. Wise beyond his years, curious about his developing sexuality, Neil found what he perceived to be love and guidance from his baseball coach. Now, ten years later, he is a teenage hustler, a terrorist of sorts, unaware of the dangerous path his life is taking. His recklessness is governed by idealized memories of his coach, memories that unexpectedly change when Brian comes to Neil for help and, ultimately, the truth."
*** ***

This was an uncomfortable, and sometimes darn-right sickening view into the characters lives and how the 2 abused characters came to terms with their individual experiences of abuse.   I genuinely felt for the damaged personalities, even the so called 'bad boy'.

I can't help believe that the author must be writing from experience or he has done some rather in depth research as it is all too realistic IMHO.   OK, so what's UFO's got to do with it ... well all I'll say is I had 'a friend', no honestly, who had a 'loosely' similar experience so I really do 'get' this. You'll just have to read it to see if you do too. My friend? She's fine as far as I know but we lost touch a few years ago but I know it wasn't until, very like the story, 15 years before she realised the truth.

It will most definitely not be a book for everyone as it has child sexual abuse, homosexuality with explicit sex content.