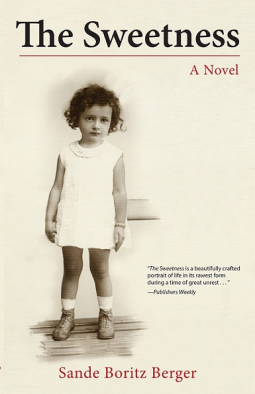 Amazon Synopsis:
Early in The Sweetness, an inquisitive young girl asks her grandmother why she is carrying nothing but a jug of sliced lemons and water when they are forced by the Germans to evacuate their ghetto. "Something sour to remind me of the sweetness," she tells her, setting the theme for what they must remember to survive.

Set during World War II, the novel is the parallel tale of two Jewish girls, cousins, living on separate continents, whose strikingly different lives ultimately converge. Brooklyn-born Mira Kane is the eighteen-year-old daughter of a well-to-do manufacturer of women’s knitwear in New York. Her cousin, eight-year-old Rosha Kaninsky, is the lone survivor of a family in Vilna exterminated by the invading Nazis. But unbeknownst to her American relatives, Rosha did not perish. Desperate to save his only child during a round-up of their ghetto, her father thrusts her into the arms of a Polish Catholic candle maker, who then hides her in a root cellar─putting her own family at risk.

The headstrong and talented Mira, who dreams of escaping Brooklyn for a career as a fashion designer, finds her ambitions abruptly thwarted when, traumatized at the fate of his European relatives, her father becomes intent on safeguarding his loved ones from threats of a brutal world, and all the family must challenge his unuttered but injurious survivor guilt. Though the American Kanes endure the experience of the Jews who got out, they reveal how even in the safety of our lives, we are profoundly affected by the dire circumstances of others.

Survivor guilt is a force that endures—whether within the context of the tragic wars of yesterday and today, or the ongoing trauma within a family. Set during WWII, and inspired by true events, The Sweetness is the story of two Jewish girls, cousins, living on separate continents—one a child in hiding, one a teen who dreams of escaping to Hollywood—whose strikingly different lives promise to converge.

My Thoughts:
Upto approx 50% I'd have given 4 stars. Now it's degenerated into a cross between Mills & Boon with a touch of 50 Shades... However I can't be too sure as I've not read 50 Shades.

I was so enchanted by the first half of this novel which centres around the privileged lifestyles of Mira, her aunt Jeanette, and family in Brooklyn.  A bittersweet tale with its stark contrasts between Mira's world and her 8 year old cousin Rosha's traumatic world of loss, despair and death in Vilna, but also of kindness and hope with the people who shelter her.

The blossoming love affair of Mira and her beau was endearing but at around 52% the story just didn't progress in the way I had imagined it would.

Whilst 'The Sweetness' by Sande Boritz Berger wasn't for me I can see it being popular for mainstream fiction readers who like a light, easy read about love, family life and loss set around a privileged Jewish family during the war.

I would like to thank the publisher via NetGalley for allowing me to review this title.

Email ThisBlogThis!Share to TwitterShare to FacebookShare to Pinterest
Labels: 2.75 out of 5, Sande Boritz Berger, The Sweetness