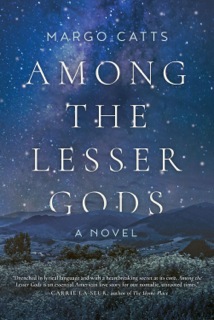 Among The Lesser Gods by Margo Catts
Publisher: Arcade Publishing (May 9, 2017)
Pages: 336

Disclaimer: A free digital copy of 'Among The Lesser Gods' was provided in exchange for an honest review and to take part in this blog tour.
Synopsis
For fans of authors like Barbara Kingsolver and Leif Enger, a stunning new voice in contemporary literary fiction.
“Tragedy and blessing. Leave them alone long enough, and it gets real hard to tell them apart.”

Elena Alvarez is living a cursed life. From the deadly fire she accidentally set as a child, to her mother’s abandonment, and now to an unwanted pregnancy, she knows better than most that small actions can have terrible consequences. Driven to the high mountains surrounding Leadville, Colorado by her latest bad decision, she’s intent on putting off the future. Perhaps there she can just hide in her grandmother’s isolated cabin and wait for something—anything—to make her next choice for her.
Instead, she is confronted by reflections of her own troubles wherever she turns—the recent widower and his two children adrift in a changed world, Elena’s own mysterious family history, and the interwoven lives within the town itself. Bit by bit, Elena begins to question her understanding of cause and effect, reexamining the tragedies she’s held on to and the wounds she’s refused to let heal.
But when the children go missing, Elena’s fragile new peace is shattered. It’s only at the prospect of fresh loss and blame that she will discover the truth of the terrible burdens we take upon ourselves, the way tragedy and redemption are inevitably intertwined—and how curses can sometimes lead to blessings, however disguised.
“If Anne Tyler turned her attention to the inter-generational intrigue of small town Colorado, it might look something like Margo Catts’s arresting debut. Drenched in lyrical language and blade’s edge observation with a heartbreaking secret at its core, Among the Lesser Gods is an essential American love story for our nomadic, unrooted times.” — Carrie La Seur, author of The Home Place

“I thoroughly enjoyed this novel. Margo Catts is the perfect guide to Leadville and to life, with a sharp eye for everyday details, a pitch-perfect ear for conversation, a sympathetic heart for her characters’ travails, and a sure foot along their unpredictable paths. I’m so happy this book crossed my desk and will definitely be looking out for a second novel from Catts.” — Brigid Pasulka, author of The Sun and Other Stars

“Margo Catts’s compassionate observation of human nature shines through in her unforgettable characters, as she immerses the reader in lives that are torn by tragedy, challenged, and changed. This is a finely crafted and uplifting novel full of warmth, wisdom, and generosity of spirit.” — Judith Allnatt, author of The Silk Road

“I didn’t want the story to end, even as I was desperate to know what would happen next.” — Tiffany Quay Tyson, author of Three Rivers
“Margo Catts has a sharp eye for the intricacies of family, love, and tragedy. In luminous prose, she deftly explores the impact of the past upon our lives. This is a heartfelt book that will break your heart at times and at others fill you with joy.” — Daniel Robinson, author of After the Fire

My Thoughts
Among The Lesser Gods is Margo Catts' debut offering and set mainly in Leadville, Colorado during the late 1970's.

Elena Alvarez is running away from yet another mess and responsibility; she's somewhat a repeat offender in the field. Up to this point she has managed to get away without having to deal fully with the consequences her actions may have caused, however with this latest move, returning home to her small community mining town, she will have to face her current predicament, and revisit her troubled, tragically painful past.

Gently paced with a slow immersion into the characters lifestyles I did unfortunately find it a little too slow and difficult to get into. By the halfway mark I still didn't feel invested in any of the characters and decided not to read any further at this time. I'd so wanted to 'love' this book as the author has spent time living in the same middle eastern country that I had for several years. I felt a connection, alas though not a connection with these characters.

There were definitely elements that I love in a book, literary fiction well written with complex flawed characters, strained family dynamics, a ghost story mystery, and an air of menacing suspense, it just fell a tad flat on my initial attempt of reading.

In all honesty I don't believe its the book at fault. I have read several similar styled story-lines recently and do find that I become restless with the same, 'same old', if my reading material isn't varied. Maybe the timing was wrong and I'll revisit it again sometime. If I do I'll update my thoughts.

There are so many rave reviews for Among The Lesser Gods and I would encourage the reader to take these other reviews into account. 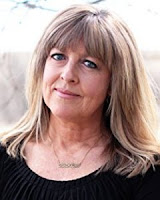 About Margo Catts
Margo Catts grew up in Los Angeles and has since lived in Utah, Indiana, and Colorado. After raising three children in the U.S., she and her husband moved to Saudi Arabia, where her Foreign Girl blog was well known in the expat community. Originally a freelance editor for textbooks and magazines, she has also done freelance writing for business, technical, and advertising clients, all the while working on her fiction. She is a contributing author to Once Upon an Expat. Among the Lesser Gods is her first novel. She now lives in Denver, Colorado.

Thanks for sharing your thoughts on this book for the tour.

Thankyou Heather, as always it's a pleasure being part of TLC Book Tours.