I Am Pilgrim by Terry Hayes 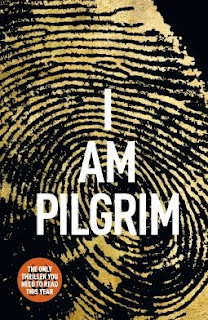 'I AM PILGRIM' AMAZON LINK

Can you commit the perfect crime?

Pilgrim is the codename for a man who doesn’t exist. The adopted son of a wealthy American family, he once headed up a secret espionage unit for US intelligence. Before he disappeared into anonymous retirement, he wrote the definitive book on forensic criminal investigation.

But that book will come back to haunt him. It will help NYPD detective Ben Bradley track him down. And it will take him to a rundown New York hotel room where the body of a woman is found facedown in a bath of acid, her features erased, her teeth missing, her fingerprints gone. It is a textbook murder – and Pilgrim wrote the book.

What begins as an unusual and challenging investigation will become a terrifying race-against-time to save America from oblivion. Pilgrim will have to make a journey from a public beheading in Mecca to a deserted ruins on the Turkish coast via a Nazi death camp in Alsace and the barren wilderness of the Hindu Kush in search of the faceless man who would commit an appalling act of mass murder in the name of his God.


My Thoughts:
'I Am Pilgrim' by Terry Hayes is an outstanding, exceptional piece of work.
It opens in a hotel room in New York, at the scene of a rather gruesome murder of a woman found in a bathtub.

Pilgrim is the codename of a man who doesn’t exist, but here he is at the request of a friend to attend and help him with the investigation.
Whilst surveying the crime scene it becomes evident that the perpetrator may have used a criminal forensic investigation book as a reference to  assist with the a murder. Intreagingly a book  that just happens to have been written by Pilgrim.

'I Am Pilgrim' by Terry Hayes is an outstanding, exceptional piece of work.

I didn't know anything about the book before I read it and don't want to spoil it for other readers but suffice to say that the reader is in for a tremendous fast paced, action packed thriller.  Hayes takes us on an exciting journey from London, Paris, Afghanistan, Saudi Arabia to the Hindu Kush, on an international manhunt to find the killer and to thwart a plot to bring down the House of Saad, the Saudi Arabian Royal family, and destruction of the USA.

Pilgrim is a witty, intelligent, quiet unassuming character that I liked very much.  I found all the characters intensely interesting.  Hayes’ style of writing is slick, taut and intense and at times pretty gruesome.  Some scenes are incredibly emotive and you find yourself believing in and caring about the  characters.  During one section set in Jeddah I was really moved, and horrified as the scene unfolded, and by the emotional destruction of those affected. The transitions between character to character and their associated stories is seamless and flawlessly managed.

This is the first spy thriller I have read, but in the post 9/11,  Iraq and Afganistan world we live in, I, as  are many other people,  am a little more aware that governments and intelligence agencies are working in the background to seek and intercept acts of terrorism.   Having also lived in Saudi Arabia, with an interest, and a little understanding of the politics of that country,  I find this a credible and frighteningly plausible tale.

The 700 pages just flew by and I never lost interest, even slightly.  'I Am Pilgrim' is my absolute favourite read this year and I would certainly recommend it to family, friends and any thriller enthusiast or novice as in my case, without reservation.
This is Hayes debut novel and I will definitely keep a look out for more by him including the film !
I absolutely loved it !

Thank you to Transworld Publishers, NetGalley and BBC Radio 2 'Drive Time' for the opportunity to review this amazing title.