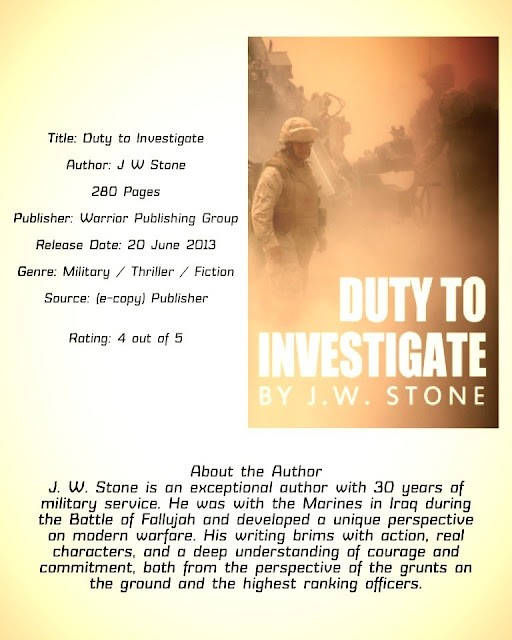 Duty to Investigate is a military crime thriller set in 2004 at the lead up to the Iraq War. I believe it is an authentic depiction of events and of the effects the war has on those involved, and the repercussions of misinterpretation of events and  actions taken.  It is a story in narrative form from several perspectives, the military, the interaction of troops with civilians and the enemy, and personal relationships.

The protagonist Lieutenant Colonel Mike Beck (USMC reserve) is good looking, highly intelligent with chauvinistic tendencies. He treats women as an R'n'R activity, to be used and discarded, but he is also compassionate, with a great deal of integrity and a strong sense of morality and totally dedicated to his work. Beck is a successful lawyer who is appointed as the 4th Division's Staff Judge Advocate.

Anne Merrill is a highly motivated newspaper journalist who also works for a tv corporation.  She is beautiful, independent, headstrong and totally driven to get to where, and get what she wants on her own terms with no compromise. After an incident with fatalities taken in an ambush in Fallujah she is determined to provide coverage of the war in Iraq and has no qualms about using her positions to get her there.

Anne stumbles across an 'incident' and takes photographs. She is convinced that she knows what occurred and is determined to report what she has witnessed.  Mike however wants to investigate further but will he jeopardise his integrity in the process to get to the truth.

Haitham Rasheed and his cousin, Ahmed are teenagers wanting to do anything to help their family and make the difficulties of everyday life in a war torn country more bearable. Their actions have disastrous repercussions for all involved.

I particularly enjoyed reading about these characters and genuinely felt empathy, and concern for them.  They  were well drawn out, highly credible with flawed and complex traits, and I'm sure that some of the events and tragic circumstances will not sit well with some readers.  However, I did not fully believe in the relationship between Beck and Anne towards the end as it appeared out of character and rather rushed.  But then again, maybe being in an intense war zone where the threat of death is a possibility, perhaps people do act out of character during that period. I don't know, but the author does, so I asked him if Beck and Anne were based on real people but as yet I've had no response.  I had hoped his reply would give credibility to his characters actions.

'Duty to Investigate' is a thrilling military tale which at times has some harrowing scenes.  It humanises the Iraqi civilians instead of demonising them as a nation.  'DTI' should appeal to anyone interested in military thrillers, and about the Iraq War.

I look forward to reading more from JW Stone.

I received an e-copy from the publisher via NetGalley for an unbiased review. I should like to thank them for the opportunity to review this title.

Email ThisBlogThis!Share to TwitterShare to FacebookShare to Pinterest
Labels: 4 out of 5, Fiction, Iraq, Military, Military Thriller