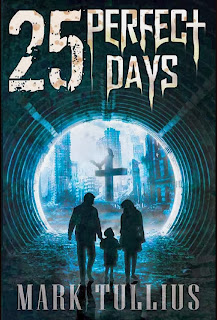 Book Synopsis:
"A totalitarian state doesn’t just happen overnight. It’s a slow, dangerous slide. 25 Perfect Days chronicles the path into a hellish future of food shortages, contaminated water, sweeping incarceration, an ultra-radical religion, state sponsored measures to reduce the population to name but a few.   Are these policies designed for the greater good or disguised to benefit a chosen few at the expense of the masses? Is this brave new world the best we could do or part of a sinister grand plan?

Through twenty-five interlinked stories, each written from a different character’s point of view, 25 Perfect Days captures the sacrifice, courage, and love needed to survive and eventually overcome this dystopian nightmare."

*** ***
My Thoughts:
Too far fetched? A touch paranoiac ? Think North Korea, Saudi Arabia, China, Syria, Hitler, and you will see a semblance of these practices for a regime to control the masses. Any word said against the State, religeous order, government, or attempt to rebel is met with violence, imprisonment, torture and even death.

25 perfect days is twenty five chapters of interlinked stories about the characters related or known to each other in some form or other over a 40 year period.   It opens with '5 Minutes Alone' where Olsen has raped and murdered Jenny a 13 year old.  Her family, The Adams, have all been granted 5 minutes alone with Olsen in his cell.  Prior to the visit, Olsen's family have pleaded and begged on several occasions to forgive him.  Their pleas go unread and destroyed.

The Adams' choice will set in motion the slow but constant downslide into chaos of the nation.  A choice that will affect everyone's freedom of choice, speech, individuality, rights and thoughts.  Religion will merge with the government to evolving into 'The Way' and 'The Controllers'.  Inch by inch lives will be ever more controlled.  The population  is controlled by either voluntary or forced sterilisation; children forcibly removed and adopted into 'The Way'.

You are asked what you might do in similar circumstances  if you were the family of the victim.  What you do could  have a catastrophic effect for the future of your country and the morality of its people.

Each of the character's actions have a cause and effect which generally result in severe consequences for everyone as 'The Way' tighten its grip on all aspects of human life.

Loss of freedom, human rights,  every aspect of life is controlled and manipulated by 'The Way'.   People are divided into 2 groups, 'them or us' with the chosen living in 'The City of Light' with clear blue skies and the others in 'The Districts'  with an atmosphere of choking grey ash and crumbling destruction all around.  Where uncontaminated food is hard to find and where a priest might be imprisoned for supplying food to the starving.   No one will escape,  all  live in fear of 'The Way' and 'The Controllers'.   A wrong word, action or thought will eventually  be reported and invoke punishment by death.

All in all I really enjoyed reading this one, however, I did  became disoriented with the multitude of characters.  There is a glossary at the end of the book which I tried to ignore due to some plot spoilers and instead made notes on each chapter of the characters noting their relationship to each other.   Although this didn't detract my enjoyment of the novel I did miss getting to know more about certain characters of interest and building a relationship with them. The result was flat card board characters on many occasions and  I  would have liked the author to concentrate on a smaller group of characters developing and fleshing them out more.  It was a pretty fast read even with the complexities of the characters relationships.  My notes definitely helped and reading the glossary at the end was immensely useful to fill in some of the gaps.

Mark Tullius has created a disturbing dystopian nightmare. This is an intelligent and fun read with a cautionary tale about the dangers of just going with the flow and not questioning what secret covert agendas are in practice behind the promises we are made by those who may one day wield immense power over us.

Thank you to Vincere Press and NetGalley for the opportunity to review this novel.