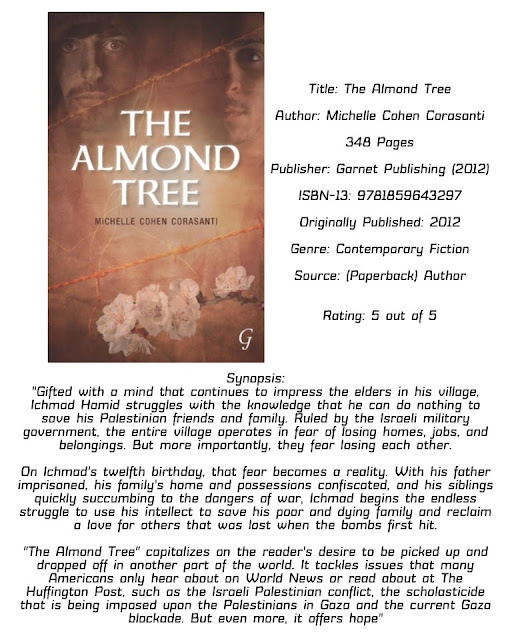 
"The Almond Tree's" opening scene was achingly difficult to read but mesmerising and I was instantly hooked.  I absolutely loved this beautiful piece of fiction about the  uncertainties of Hamid and his family's day to day lives.  Set in the Middle East in Israeli occupied Palestine it is told in four parts spanning a 50 year period from the 50's to 2009.
It is predominantly the story of two brothers one eaten up and destroyed by hatred and one who is able to forgive and manages to remain humane.

Imagine at 12 years of age your country has been invaded and the conquerors telling you, you have no right to be there because, in a 'book', it was written that this country is theirs. They have come to claim their land with the support and protection of other countries. They take your home and land that has been tended and cared for for centuries. You  are unwelcome, hated and forced to comply with curfews with fear of imprisonment if you break the rules. Your makeshift shack can be destroyed at any time leaving you without shelter and defenceless. There is no redress for the murder of your siblings or children or for the violence and destruction rent on your people.

With Ichmad's narrative it successfully transports you to this place and you experience the  constant tension of conflict, you feel the  grief and frustration that he feels. It leaves you wondering if you too could tolerate the aggressors violence and injustices with the dignity and calm Ichmad does.

This story is so powerfully portrayed that I had to remind myself that it was a novel and not a memoir.  I 'Googled' on occasions to see if  the characters were indeed real.  I did come across one, that of the poet Mahmoud Darwish and his poem 'Identity Card' which I found rather profound and have included at the end of my review.

Michelle Cohen Corasanti's characters are amazingly well drawn with warmth, love,  but also frustration, and hatred.  I believe she has tried to write  in an honest and unbiased a manner. I was somewhat uncomfortable with the  generalisation  portraying the Palestinians as victims and the Israeli's as aggressors.  With the complexities and passions of all involved in this longstanding conflict things are seldom so black and white. While reading this book I had to constantly remind myself that  Michelle Cohen Corasanti is herself an American Jew.

If you enjoyed 'The Kite Runner' by Khaled Hosseini, or  'Mornings in Jenin' by Susan AbulhawaI  I would definitely recommend 'The Almond Tree,' and especially to anyone interested in human rights. Book reading groups would benefit from reading it and it would certainly generate some interesting discussions.

I received a complimentary copy of the book from the author via 'GoodReads', and I would like to thank them for the opportunity to review this debut novel.

Put it on record
--I am an Arab
And the number of my card is fifty thousand
I have eight childern
And the ninth is due after summer.
What's there to be angry about?

Put it on record.
--I am an Arab
Working with comrades of toil in a quarry.
I have eight childern
For them I wrest the loaf of bread,
The clothes and exercise books
From the rocks
And beg for no alms at your doors,
--Lower not myself at your doorstep.
--What's there to be angry about?

Put it on record.
--I am an Arab.
I am a name without a tide,
Patient in a country where everything
Lives in a whirlpool of anger.
--My roots
--Took hold before the birth of time
--Before the burgeoning of the ages,
--Before cypess and olive trees,
--Before the proliferation of weeds.

My father is from the family of the plough
--Not from highborn nobles.
And my grandfather was a peasant
--Without line or genealogy.
My house is a watchman's hut
--Made of sticks and reeds.
Does my status satisfy you?
--I am a name without a surname.

Put it on Record.
--I am an Arab.
Color of hair: jet black.
Color of eyes: brown.
My distinguishing features:
--On my head the 'iqal cords over a keffiyeh
--Scratching him who touches it.
My address:
--I'm from a village, remote, forgotten,
--Its streets without name
--And all its men in the fields and quarry.

--What's there to be angry about?

Put it on record.
--I am an Arab.
You stole my forefathers' vineyards
--And land I used to till,
--I and all my childern,
--And you left us and all my grandchildren
--Nothing but these rocks.
--Will your government be taking them too
--As is being said?

So!
--Put it on record at the top of page one:
--I don't hate people,
--I trepass on no one's property.
And yet, if I were to become starved
--I shall eat the flesh of my usurper.
--Beware, beware of my starvation.
--And of my anger!

Email ThisBlogThis!Share to TwitterShare to FacebookShare to Pinterest
Labels: 5 out of 5, Conflict, Israel, Middle East, Palestine, The Almond Tree