Letters From a Murderer - A Jameson and Argenti case John Mathews 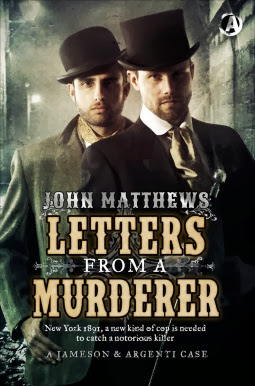 Letters From a Murderer - A Jameson and Argenti case
John Mathews

If Arthur Conan Doyle had been asked to write a sequel to Gangs of New York, then this would be it.

“One genius criminal profiler. One ruthless, streetwise cop. Both will need all their wits to capture the most notorious killer of all time.”

New York, 1891. A prostitute is found brutally murdered. The victim bears the same hallmarks as a notorious recent killing spree in England. Could it be that killer has crossed the Atlantic to fresh killing grounds? Or is this simply a copycat murder? Fear spreads through a city already rife with cut-throat gangs, corruption and vice. Aristocratic English pathologist, Finley Jameson, is teamed up with Joseph Argenti, a streetwise New York cop, to solve the case. But as the body-count rises and the killer taunts his pursuers in open letters, Jameson & Argenti find themselves fighting not just to prevent yet more victims, but also to save the city’s very soul."

My Thoughts:
I liked this atmospheric period piece set in New York in the 1890's. It is a stylish thriller that immersed me into a dull dingy gaslight world in its infancy of emerging into a brighter world of modern electricity. A world full of the 'hustle and bustle' of noisy smelly streets, dark sinister alleys with a crime detection force on the cusp of modern day forensics. Think Sherlock Holmes with a touch of The Gangs of New York and a dash of Deadwood, that would pretty much describe this novel.

The plot is a generous mix of historical fact and supposition fiction and is a very credible piece. It places the murderer 'Jack The The Ripper' back in his homeland of New York where he leaves another bloody trail of slaughter on his latest murder spree.

There are all the 'usual suspects' for a Ripper tale including police corruption, the criminal underworld, secrets and lies, and of course the unfortunate 'ladies of the night'. Other characters include Holmes', I mean Jameson's manservant, Lawrence, and the evil, sociopath Michael Tierney, of the Tierney mob.

The pacing is steady throughout carefully building up a credible, sinister, sleazy, cut throat world in which the characters live. The characters are well drawn and fleshed out along with complex and flawed personalities. Argenti, a down to earth, perceptive immigrant cop in New York has been teamed up with the charismatic, highly privileged British 'toff', Finley Jameson. They are an odd couple indeed but the polar differences in their backgrounds and personalities works wonderfully well making 'Letters From A Murderer' an exciting, captivating, thrilling and believable read.

The unlikely duo assisted by Lawrence battle to identify and apprehend the murderer to put an end to his slaughter, but their efforts are hampered by a possible copy cat murderer, and corruption within the force. I thoroughly enjoyed 'Letters From a Murderer' and look forward to reading more from the duo.

Fans of historical crime, Jack The Ripper style books, and crime fiction in general will enjoy 'Letters From A Murderer'. I highly recommend it.

I received a digital ARC from the Publisher via NetGalley and thank them for the opportunity to review this title.

Email ThisBlogThis!Share to TwitterShare to FacebookShare to Pinterest
Labels: 3.5 out of 5, Crime Thrillers, Fiction, Murder, Mystery