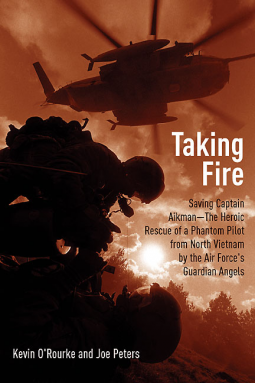 Rating: Read but Unrated - Not my thing

Synopsis: (Amazon)
"American military special operations forces Rangers, SEALs, and others have become a well recognized and highly respected part of our popular culture. But whom do these elite warriors look to in their times of greatest need: when wounded on the battlefield, cut off deep behind enemy lines, or adrift in the expanse of the world's oceans? They look skyward, hoping to catch a glimpse of their own personal guardian angel: a U.S. Air Force pararescue jumper (PJ) who lives, and sometimes dies, by the motto that others may live.

Taking Fire provides an up-close look into the heroism and mystique of this little known segment of the Air Force Special Tactics community by focusing on one of the most dramatic rescues of the Vietnam War. It was June 1972 and Capt. Lynn Aikman is returning from a bombing mission over North Vietnam when his F-4 Phantom is jumped by an enemy MiG and shot down. He and his backseater Tom Hanton eject from their crippled aircraft, but Hanton lands near a village and is quickly captured by local militia. Badly injured during the ejection, Aikman lands some distance from the village, and there is a chance that he can be recovered if American rescuers can reach him before the enemy does.

Now on the ground and drifting in and out of consciousness, Captain Aikman looks up and suddenly sees his guardian angel in the form of USAF Pararescue Jumper Chuck McGrath. As Sergeant McGrath is preparing to hook the downed pilot to a hoist line, he sees it fall to the ground. Hostile fire on the hovering Jolly Green Giant rescue helicopter has damaged the hoist mechanism causing the operator to cut the line. While circling A-1 Skyraiders strafe the militia to keep them away from Aikman and McGrath, the helicopter crew races to come up with a plan. It's getting dark, and they'll only have one chance.

Taking Fire is an exciting, highly dramatic story of life and death over North Vietnam. Much more than a chronicle the events of 27 June 1972, the book gives the reader an up-close look at the little known world of the U.S. Air Force's elite aerial rescue force.'

My Thoughts:
Taking Fire is written in a military documented style of writing using interviews with the para rescue servicemen. I felt disengaged and emotionally unconnected because of this style of writing and did not really get a sense of who the real men were. The authors do go some way to describe Chuck's life leading upto the main event but felt they were far more comfortable with in-depth details of the various helicopters used during the missions.

There are some horrific incidents described during the course of this book but even so I did not feel any real sense of involvement. I am not heartless it is purely the writing style. I don't think the authors meant it to be a 'tear jerker' or 'feel sorry for' story, and intended it to be a clear, matter of all the facts, military book documenting the rescue missions and the bravery of these little known servicemen during the Vietnam war. They definitely achieved their aim.

I have read many factual books about war but this was just not for me. In my opinion this is a man's book and I would recommend it to anyone with an interest in military operations wanting to find out more about these extremely brave men and about the dangerous rescue missions.Thank you to the Publisher via Net Galley for allowing me to review this title.