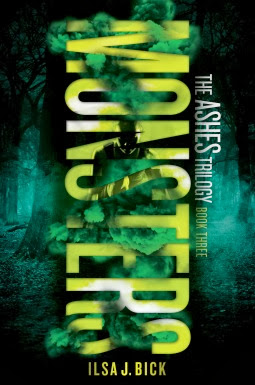 Amazon Synopsis:
"The Changed are on the move. The Spared are out of time. The End...is now.

When her parents died, Alex thought things couldn't get much worse--until the doctors found the monster in her head.

She headed into the wilderness as a good-bye, to leave everything behind. But then the end of the world happened, and Alex took the first step down a treacherous road of betrayal and terror and death.

Now, with no hope of rescue--on the brink of starvation in a winter that just won't quit--she discovers a new and horrifying truth.

The Change isn't over.
The Changed are still evolving.
And...they've had help.

With this final volume of The Ashes Trilogy, Ilsa J. Bick delivers a riveting, blockbuster finish, returning readers to a brutal, post-apocalyptic world where no one is safe and hope is in short supply.

A world where, from these ashes, the monsters may rise."

My Thoughts:
My 13yr old daughter and I absolutely loved Ashes, and Shadows and eagerly awaited the final instalment of the trilogy. However, I was rather disappointed. I found the writing style to be jumpy, leaping from one scene and character to another, sometimes it seemed mid sentence. This was far too disorienting for me to want to continue and I regretfully did not finish this one.

Ashes in my opinion was by far the best and told the story focusing on, Ellie, Alex and Tom's points of view. Shadows, not packing as much punch as Ashes, but still a great read, concentrated on a greater cast of characters perspectives. Monsters has too many voices, with the main cast and secondary characters jostling for attention. It also became tedious at times with so many long drawn-out action scenes that I began to skim read, and ultimately abandoned it.

Maybe it's been too long between reads, about a year since Shadows but I just found it hard work to keep up and just wasn't enjoying having to put such effort into a YA/Teen book. There is a section at the back summarising some events and characters from the previous books which I feel would have been better placed at the front, but even this wasn't enough for me to want to persevere.

Don't get me wrong Monsters is very well written and I would still recommend it to anybody who has already invested in this trilogy, but just not to expect any wrapping up of the series as it certainly didn't answer any of the questions raised in Ashes, like who or what was behind the EMP for starters.

My daughter is still reading it and thoroughly enjoying the story line, all be it very gory. She does say that it's very confusing with all the different characters but she is determined to finish it. I will include her final verdict in due course.

I received a digital ARC from the publisher through NetGalley and would like to thank them for the opportunity to review this title.